History of the Church Clocks 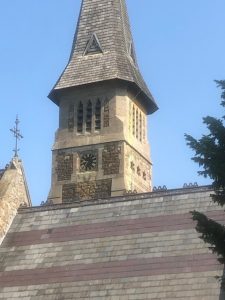 There was an original Chapel called the Chapel of Ease to the west of the current Church. This was constructed in 1807 under the direction of Bishop Porteus who was the Bishop of London. This building was smaller than the current Church and some of the original stone may have been used in the building of the later Church which was completed in 1865. The larger Church called St Mary the Virgin was designed by CH Cooke and cost £2280.

Whilst there is no photographic or architectural drawing evidence, a sketch shows that the first Chapel had a clock which may have been installed later than 1807 or perhaps not at all. It is not clear from the records.

Whilst the current Church was completed in 1865, it is uncertain whether it had a clock from the beginning.  However mention is made of a Clock Maker called JW Benson Limited of Ludgate Hill London. They existed between 1847 and 1975 when they got taken over. Up until the early 1900’s they made Church clocks known as Turret Clocks. It seems likely that they installed a clock into St Mary The Virgin either when it was completed or shortly afterwards and the records mention this Maker. If this was the case then this mechanism was subsequently removed. 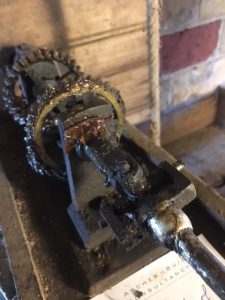 Another Clock Maker called J Smith and Sons of Derby have their nameplate on the current clock mechanism and they have confirmed in correspondence that their records show they installed the current clock in 1913 and reused the two clock dials.

The clock has subsequently undergone changes in the 2000’s to convert it to electric motor operation. The bell is operated via a receiver which uses signals from a powerful and accurate atomic clock and transmitter located at Anthorn near to the Lake District.

The Church clock has had several repairs carried out in recent years by Gillett and Johnson based now in Edenbridge who also did the clockwork to electric conversion works. The last main repair was in 2020 when new brass bearings were provided to the hand tubes and the hand mechanism overhauled. The north facing clock face was also cleaned.

There are notes held on the Ide Hill Society archive although these are a little sketchy. There are also various links below giving access to information on both JW Benson and J Smith and Sons Limited and a Guide to Turret Clocks. 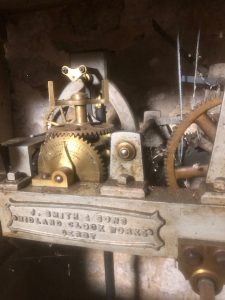